Militaria from the Gallipoli Campaign By Gary Traynor

Militaria from the Gallipoli Campaign By Gary Traynor

Militaria from the Gallipoli Campaign

As Australian Diggers clung desperately to the Gallipoli Peninsula between April and December 1915, necessity became the mother of invention.

When they finally evacuated, a lot of battlefield refuse, relics and devices were naturally left behind.

While the ‘Gallipoli inventions’ are famous, less is known about their ‘back story’, the human context and living conditions that gave rise to them.

Life on ANZAC will be examined through a number of fascinating objects including firearms gathered during multiple visits to Gallipoli.

Gary is a part time soldier, trained investigator and Assistant Curator in Military Heraldry and Technology at the Australian War Memorial. 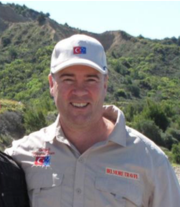 Gary has been actively involved in the preservation of militaria and research of military history for well over thirty years.

He is very privileged to have worked for several travel agent and trekking companies, conducting tours to battlefields of the Great War, the Kokoda Trail and the Thai Burma Railway. The highlight of his travels encompassed the two major anniversaries commemorating 75 years (in 1990 he witnessed the final pilgrimage of First World War veterans to Gallipoli and in 2017 he was at Kokoda Station with the last gathering of veterans in Papua New Guinea).

Gary has 23 years’ experience with the New South Wales Police Force which provided investigative skills transferable to the battleground. He is also a former infantryman within the Australian Army Reserve, having served with both 4/3 RNSWR and UNSWR.

He has worked at the Australian War Memorial, starting off as a Volunteer Guide and working his way through the galleries, finally winning a contract as Assistant Curator in Military Heraldry and Technology. As such, he has handled many rare and valuable items preserved in our National Collection.

Gary has consulted for Foxtel’s The History Channel (Sir Tony Robinson’s Tour of Duty) where he performed in an “Antiques Roadshow” style role. He was also military advisor for the mini-series adaption of Bryce Courtney’s “Jessica” and theatrical productions on behalf of Legacy Australia. His literary work has been published in a number of historical journals including the Australian War Memorial’s WARTIME magazine, The Shrine’s REMEMBRANCE and INSIDE HISTORY magazine. Gary has also assisted in the Army History Unit’s publication “To Kokoda” and Wiley Publications’ “Kokoda for Dummies” by Dr Peter Williams. He is currently working on the “Kokoda Encyclopedia” with his wing man, Adrian Clack.

However he is perhaps best known as the founder of the ‘non-profit’ organisation MEDALS GONE MISSING which has been returning lost and stolen war medals back to the rightful family since 2008.

Although entry is free, a gold coin donation is appreciated. RSVP is essential by Wednesday 28th November 2018 as numbers are restricted.

Call the President (Robert Muscat) on 0419 698 783 or email rsvp@militaryhistorynsw.com.au

Flyer – Militaria from the Gallipoli Campaign